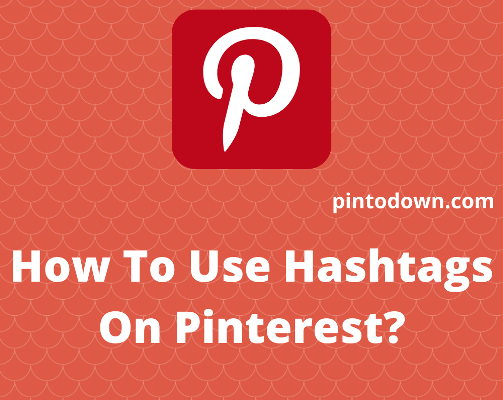 Hashtags are the words used to identify a specific pin on a topic. They are present on every social media site like Instagram, Facebook, and Twitter. Hashtags precede with a hash (#) and then single or multiple words without any space or punctuation.

Pinterest hashtags work almost as the hashtags work on other platforms. But now, they are not clickable and do not lead to a hashtag feed. Use hashtags at the end of the description.

The reason is that users are adapted to see the hashtags in the end. Your hashtags will appear in the search feed if you use specific or broad hashtags.

Pinterest also helps you discover the hashtags people are searching for, so you can use them in your description.

As you all know, there are millions of pins uploaded by users in different categories on Pinterest. So, using hashtags at the end of the description has some purpose. Hashtags keep your content fresh and remain long on Pinterest sites.

When you are adding some specific hashtags, something relevant, and trendy Pinterest tag and assign these hashtags and show them to the right audience. Hashtags have become popular because it helps people to find information quickly. Hashtags play a vital role in ranking your account and content.

So, carefully add these hashtags, and these will help discover the Pinterest categories of content you are creating.

After writing the description of a specific topic, you can write hashtags according to it. Pinterest allows you to use a maximum of 20 hashtags. But it becomes clumsy using so many hashtags and depicts that you are not specific about that pin.

If you use so many irrelevant hashtags, spammy, then your account may be blocked or suspended. If you are not sure which hashtags you should use, search for hashtags using keywords in the search bar. Choose the hashtags that are relevant, make sense, and valuable to your pin and bring traffic to the site.

Best ways to use hashtags:

Hashtags are optional but useful to attract a specific audience for that particular pin. They help to find your content easily in chronological order. There are many ways in which you use hashtags and benefit from them.

The most important thing about adding hashtags is that they are useful, relevant, and make sense. Never use hashtags of fashion style in food recipes. Pinterest also discovers the content of categories that you are offering by hashtags. It showcases your content to the right audience.

Use seasonal hashtags when possible. Keep in mind that Pinterest shows more interest in the trendy, seasonal, and current topic. When there is a new year season, use #newyearresolution, #partyseason, or any other like this. Seasonal hashtags are used during the season, but make sure that your content has some value, and it will show up on the search.

Pinterest allows users to use a maximum of 20 hashtags. But do not use ever so many hashtags. It will create a fuss for you, so it is also a tip for other social platforms. Your account might block due to this issue. Use minimum hashtags that are useful, relevant, and that is the only thing that matters.

A mix of broad and specific hashtags use one of the best ways to use the hashtags. For example, if you want to use style hashtag, use #fashion, and then you can also add #photography. Fashion is a broad hashtag, and that it will reach a larger audience, famous and large brands, and account on Pinterest.

A specific hashtag in your pin description guides your content to get a smaller audience. Mix up is useful for people that are new to Pinterest and do not have a larger audience.

Pinterest hashtags work best to find the content easily. But there are some issues you cope with due to the use of hashtags. Avoid using irrelevant, crazy, and vulgar hashtags.

As long as your hashtags are working best and sound strategy, the use of hashtags on Pinterest will be worth it for you.